Liz McManus’s first novel, Acts of Subversion, was published in 1992 and was shortlisted for the Aer Lingus/Irish Times award. Then she was elected as a TD for North Wicklow. She was a TD for 19 years, a Minister of State 1994-1997. She retired from politics before the last General Election and went back to writing full time. A Shadow in the Yard is her second novel. She is the current Chair of the Irish Writers’ Centre Board and she’s writing a third novel. Before her political career she was actively involved in the struggle for women’s rights and was founder member and director of the first Women’s Refuge in Bray.

LM: In an interview at the back of the book you say that social and cultural change and political upheaval are central to A Shadow in the Yard. Then you go on to say that you think writing ‘is a way to meet the challenge of living in a world that refuses to stand still.’ Could you say more about that?

LMcM: Because it had taken me 24 years to write a second novel I’m acutely aware of the changes that have occurred in Irish society over that period and I found myself exploring those changes through the lives of my characters. Two women of different generations face similar challenges but the context is radically different for each one. Maybe I should have written that writing – for me – is a way to meet our own challenges. 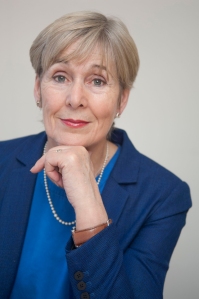 LMcM: Yes I love it too. It is a great guide for someone like me who has emerged out of years of political engagement into the reflective, imaginative world of literature. Gordimer is not a particular influence but I like the way she can be intensely political without losing the detachment that is required of the writer. She understands that character takes precedence over ideology. Funnily enough, that old misogynist Hemingway has had an influence on me. His writing is crystal clear and wonderful. I like Richard Ford, John Banville, Éilís Ni Dhuibhne. Recently I read Richard Flanagan’s The Narrow Road to the Deep North and was blown away.

LM: You also say in that interview that your life as a TD (dating from 1992 to the last General Election, when you retired from politics) was too busy for writing. But you did continue to write: you’ve been a member of the Web writing group for 25 years. Anything you’d like to say about that?

LMcM: There is a world of difference between dabbling in writing – which is what I did while I was a TD – and the sacramental, total immersion into the waters of the imagination. To have the freedom to write for as long as I can and about what I choose: that is so liberating I have to pinch myself sometimes. I still dream that men will come to my door, demanding to know how I escaped out of the bubble of Dáil Eireann.

LM: A Shadow in the Yard has some interesting reflections on marriage. Would you like to say more about that?

LMcM: Marriage, oh dear! It is a subject of never-ending interest. Two people tied together in bonds of matrimony – it sounds like torture or some sadomasochistic ritual. We dream of marriage, choose to tie the knot but that doesn’t mean we have the faintest idea what is in store afterwards. Such a fertile ground for fiction… no wonder we all write about it.

LM: Few writers from the South are brave enough to write about the North (Mary O’Donnell’s recent Where They Lie comes to mind). Can you talk about that?

LMcM: I am haunted by Northern Ireland. My mother came from Co Antrim. Because she wasn’t a Catholic my childhood was shadowed by the fact that she – and, by extension, I – was different. In 1969 I worked in Derry. It was a time of the Civil Rights Movement when hope reigned and anything seemed possible. What followed was thirty years of a sordid, unnecessary war in which thousands were killed or maimed. I find it laughable that some political parties are rewriting it as a war of liberation. It was anything but. The exigencies of the Peace Agreement depend on our collective amnesia but I don’t believe that is good politics. John Hewitt, in his poem “Mosaic” reminds us of the suffering of those accidentally caught up in the violence. My fictional character, Rosaleen McAvady is one of them. I wanted to tell her story.

LM: I like the way A Shadow in the Yard explores the choices we make and how they reverberate through time and other people’s lives. I can’t talk about the end without giving it away, but can I say this? – There is a beautifully nuanced acknowledgement of an aspect of the issue of reproductive choice that doesn’t get nearly enough air in Ireland, with the debate being as fraught as it is. Can you talk about that? Where do you stand on the ‘Repeal the 8th’ campaign?

LMcM: My view is simple. Women can be trusted to make decisions that are appropriate for them. The rights we exercise by travelling to the UK should be granted in our own country. Reproductive rights are a matter for legislation not our Constitution. Repeal the 8th? Yes.

LMcM: The relationship between Rosaleen and Kevin is a traditional one. His power is challenged by her increasing independence. Only when you are free can you give yourself fully to someone else, can you belong to them. In Rosaleen’s case, she does not experience the freedom to be fully herself.

LM: One of the characters feels a deep antipathy for one of her children. This is a disturbing aspect of the novel, but it does have a bearing on the overall themes – did you find that situation difficult to write?

LMcM: Not particularly difficult. I felt it appropriate because in those days, the unwanted child was absorbed into the lives of women as a matter of course. There was no proper contraception and no abortion. It was inevitable that some women found the situation frustrating and at times, unbearable. You have to remember that this part of the book is set in a time preceding the Women’s Liberation Movement in Ireland. Women did what their mothers did then.

LM: Do you think writing is (or should be) political?

LMcM: No and yes. More than anything else, writing is about character. And yet, in my writing at least, characters can’t be disconnected from their context. That context is, invariably, political.

LM: In what way are the two worlds (writing & government) different, and how are they the same?

LMcM: In government you have to assess a situation quickly and make a decision. It won’t always be the right decision, as we know, but that is the way government works. There is no time for reflection, even for creativity. It is about judgement and clarity. Writing, for me anyway, is very different. It is about allowing ideas float around in your head, and to wait for characters to take up residence in your being and direct operations. It is about surrender as much as about control. In politics if you surrender, you’re dead.

LM: What are you working on now?

LMcM: Another novel. It’s based on papers belonging to my mother’s family. They were Unitarians. I’m interested in how the radical ideas that they promulgated were submerged by Nationalism and Orangeism and yet, somehow, they survived. It will take forever to write. I feel it is a race between me and dementia to get it finished.