The Foundling Museum on London’s Brunswick Square is a treat to visit. We’ve been there twice in the last few months and on both occasions we nearly had the place to ourselves. Which seems like a point in its favour, but it’s not so great from the museum’s point of view; it deserves more traffic – especially with its current exhibition. For Bedrooms of London, photographer Katie Wilson and writer Isabella Walker have compiled a series of images of the bedrooms of children living below the poverty line in this city.  Its premise is all the more effective for being so simple: a series of photographs of rooms where children sleep, with short textual accounts of their circumstances, describing their living situations, how they got there, what they want and what they lack, what they imagine to be ahead of them. The absolute knockout realisation comes from the predominance of single-parent – for parent, read mother – families among these brave, exhausted people. How trapped they are. The photos and text are sobering, they deserve attention. Although there are one or two supportive fathers, the overwhelming impression is that it is women who are left to cope in these extreme circumstances. 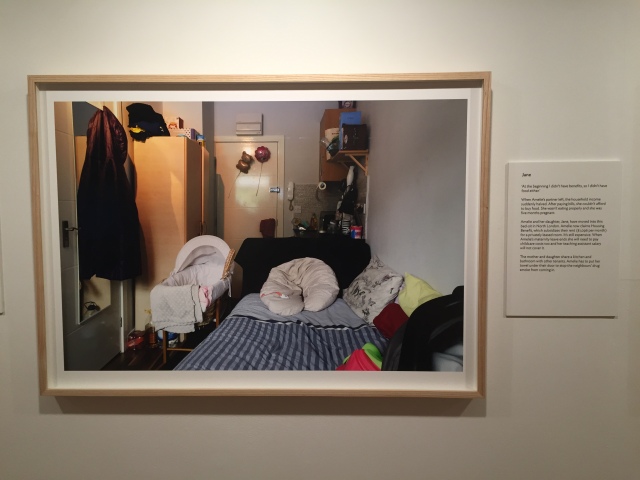 Where are the fathers of these children? One of them, we are told is ‘pursuing his dream of becoming a rap star’ while the young mother of his small children struggles to provide for and protect them, unable to work until they are both old enough for school. That simple line, about the pursuit of a dream, says it all. The question of absent fathers is all too familiar, but we don’t hear it asked often enough. We should never stop asking. All talk of the Magdalen Laundries in Ireland is about the women – where were the fathers of all those babies? Who concealed and protected those men so that they were free to get on with their lives and ‘pursue their dreams’ while their partners were caught and, effectively,  imprisoned? In one of the exhibition stories, we are told that a woman called Kelly, who had been trafficked as a domestic slave, now lives in one room with her one-year old son. They rarely leave their borough because travel is so expensive. She fills her time cleaning their bare room ‘so that she doesn’t have to think.’ 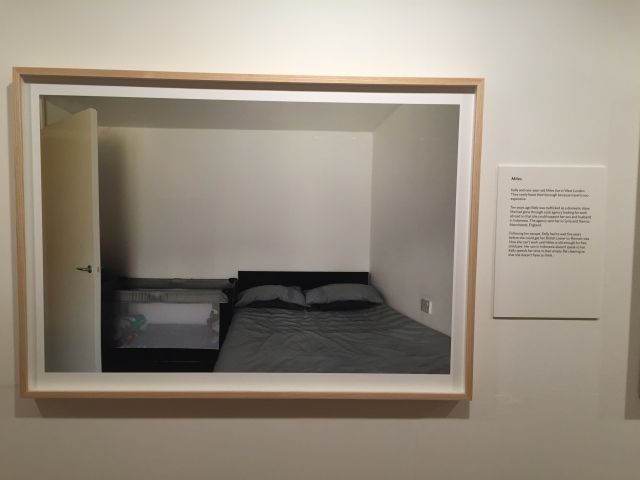 The Bedrooms of London exhibition was made in partnership between the Childhood Trust & the Foundling Museum. A previous exhibition, Ladies of Quality and Distinction, showed portraits of women who signed Thomas Coram’s 1735 petition to King George 11 calling for the Foundling Hospital to be established. The portraits temporarily displaced portraits of illustrious men who served on the board. (Note: temporarily) The museum’s website points out that, although the ‘face’ of the hospital was male, women were essential to its day-to-day management at every level, from wet-nurse to matron. Isn’t it interesting that the acceptable face of such an institution was male when the over-riding circumstance that caused so much misery and hardship for women was the absence of male support. A striking feature of the hospital’s history is that the arts world was quick to offer its support to the enterprise. Hogarth was a key influence here, donating paintings and persuading his friends to do the same. Handel composed an anthem for the hospital and performed several fund-raising concerts. There is an ongoing, comprehensive arts programme of which Bedrooms of London is the most recent outcome. 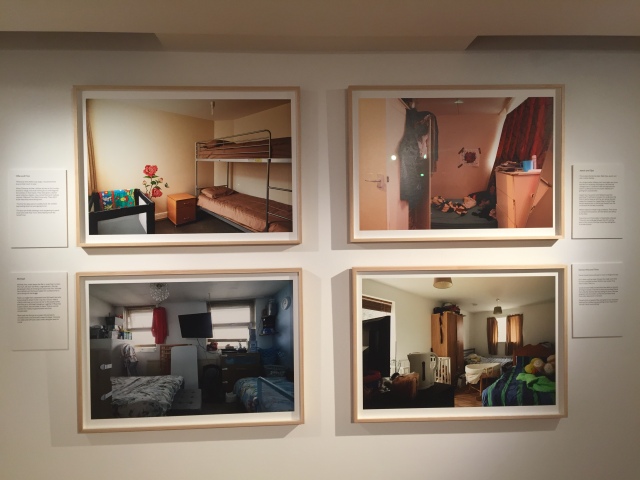 Upstairs we went to a screening of Fish Tank, Andrea Arnold’s powerful 2009 film set in Essex. Fifteen year old Mia, tough, aggressive, free-spirited and brave, navigates the treacherous currents of her time and place while practising for the dancing audition that she hopes will give her a way out of her circumstances. No spoilers here, but I will say that at the end of the film, she leaves home. But if the suggestion is that she is riding into the sunset and a new life, my own depressing sense of her story is that she’s headed more or less directly for the world of the Bedrooms of London exhibition downstairs. Which is, of course, the world she is trying to escape.

A few months ago we came across Lily Cole’s film Balls, not in the Foundling Museum (which also showed it at the time) but in Haworth Parsonage. Cole was the Bronte Society’s creative partner for 2018 and she made the film to mark the bicentenary of Emily Bronte. In it, she imagines Heathcliff as a baby, being brought to a Foundling Hospital by his mother. The title comes from the Foundling Hospital’s custom of having a collection of white, black and red balls in a bag, chosen blind by each petitioning mother in turn. If you chose a white ball, your baby was accepted, conditional on a medical exam. A black ball meant rejection. A red ball put your baby on reserve, to be taken in if a white-ball baby failed the medical. There is no melodrama in this quiet, extraordinary film. It quietly reaches inside your ribcage and tugs your heart loose, as though mistaking it for one of those fateful, desperately needed, absolutely dreaded, balls.