Interview with Celia de Fréine: On writing a biography – in Irish – of Louise Gavan Duffy

LM: Congratulations, Celia: your biography (in Irish) of Louise Gavan-Duffy – Ceannródaí – has been shortlisted for the very first Irish language category in the upcoming Irish Book Awards. For as long as I’ve known you, you have consistently championed writing in Irish, calling for its inclusion at literary events and on panels and in anthologies. Before we talk about Ceannródaí, can you tell us what this new category of award means to Irish Language writing generally and to you in particular? 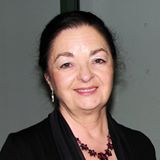 CdF: This new category of award helps place Irish language writing centre stage. There are already several awards for literature in Irish, in particular those awarded by Oireachtas na Gaeilge every year but, generally speaking, it is only the world of Irish language speakers who knows about these. With this new award many people in the book business will be made more aware of Irish language writing. I am thrilled that Luíse Ghabhánach Ní Dhufaigh Ceannródaí has been shortlisted for the award and in the year of its inception. It has drawn attention to my book and garnered lots of good wishes and interest in it.

LM: Do you see yourself as a language activist? Could you tell us about your role in Aontas na Scríbhneoirí Gaeilge, for example?

CdF: Yes, it’s true to say I am an activist when it comes to writing in Irish and to promoting that writing. Aontas na Scríbhenoirí Gaeilge is a lobby group that seeks to explore what opportunities are available to writers in Irish, to create new opportunities and to decide how best to exploit these opportunities. I am at present chair of the Aontas. So far we have met the Directors of various institutions to discuss what we can bring to the table and how our needs can be met.

LM: What drew you to write about Luíse/Louise Gavan-Duffy in the first place? And would you tell us how your interest grew from writing the play to writing a full-length biography? Were you nervous about taking on such a big project? 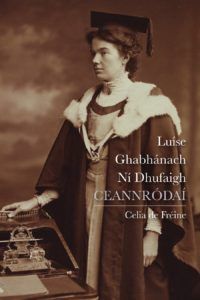 CdF: When I was in America some years ago I attended a talk about Constance Markievicz and during the discussion afterwards drew attention to the fact that when it comes to discussing the women of 1916, Louise rarely features. She was however the first joint secretary of Cumann na mBan, spent Easter Week in the GPO and co-counded Scoil Bhríde, Ireland’s first gaelscoil, in 1917. Her legacy lives on to this day in the Irish spoken in the classrooms and playground by the four hundred plus children who attend her school and in the other gaelscoileanna throughout the country.

As the 2016 centenary celebrations drew near there seemed to be little interest in Louise so I decided to write a play about her. When I had written the play I realized not many had seen it. As I had already done a fair amount of research, I decided to continue and write the biography so that her achievements would be put on permanent record. And yes, I was shaking in my shoes at the thought of taking on something that big.

LM: Will it be translated into English (please say yes)? And if so, will you translate it or would you leave that task to someone else?

CdF: Although lots of people are reading Ceannródaí (which includes lots of quotes in English and French) and although the feedback is positive, I keep hearing from others who are unable to read it in Irish and who have asked that it be translated into English. The answer is that yes, it probably will be translated into English. And by me. Already three different publishers have expressed an interest in the manuscript.

LM: You write poetry, essays and plays in both English and Irish. How do you decide which language is right for any given subject?

CdF: With poetry I’m always moving between languages. I tend to write plays in Irish or English, depending on who the target audience is. Essays, talks, etc., are in response to demand / requests also. Ceannródaí is my first book length work of prose. Had anyone told me a few years ago that that book would be a biography in Irish I wouldn’t have believed them. As a poet, or indeed as a playwright, I tend to write with a minimum of words and have always baulked at the thought of a full length book in prose. But there is no accounting for what happens!

LM: You’re writing a novel in Irish now, can you tell us about that?

CdF: It’s a novel set in Connemara and involves a young widow, who comes to work for An Garda Síochána as a forensic psychologist and who teams up with a Detective Inspector whom she knows from way back. It’s the kind of book that could develop into a series but, as soon as it’s finished, I’ll be heading down the poetry route.

LM: It sounds like the kind of book that would make for good television too …TV stations take note.  Best of luck with it all, Celia and in particular good luck at the Book Awards on 27th November.

There are 18 categories to vote on.  Visit An Post Irish Book Awards 2018 for the full list of shortlisted entries.

An extended interview/conversation between Celia and me features in the current issue of Irish University Review Vol 48 issue 2 (November 2018).

An earlier interview can be read online in The Dublin Review of Books here.

Celia de Fréine is a poet, playwright, screenwriter and translator who writes in Irish and English. She was born in Newtownards, County Down and now divides her time between Dublin and Connemara. Awards for her poetry include the Patrick Kavanagh Award(1994) and Gradam Litríochta Chló Iar-Chonnacht (2004). To date she has published eight collections of poetry of which cuir amach seo dom : riddle me this (Arlen House, 2014), Blood Debts (Scotus Press, 2014) and A lesson in Can’t (Scotus Press, 2014) are her most recent. Her plays have won many Oireachtas awards and are staged regularly. Luíse Ghabhánach Ní Dhufaigh Ceannródaí, her biography of Louise Gavan Duffy was published by LeabhairCOMHAR in 2018.

1 Response to Interview with Celia de Fréine: On writing a biography – in Irish – of Louise Gavan Duffy