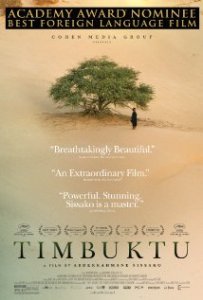 Timbuktu is a desert city in Mali (West Africa). In its day it has been, variously: a city with an aura of mystery, a prosperous trading centre known for its book trade and learning and: dismissed in western stereotype as the middle-of-nowhere or about-as-far-away-as-you-can-get. The Irish equivalent would be Bally-go-backwards. Timbuktu is also the title of a film by Abderrahmane Sissako, in which the city (in the film it has the appearance and atmosphere of a village) is controlled by mujahideen according to sharia law.

This is the most visually striking, beautiful film I have seen in a long time, if ever (Cinematography is by Sofian El Fani). There is one scene in particular – where a Tuareg herdsman walks away from the body of a fisherman across a golden, limpid stretch of river under a setting sun – that will stay with me. Despite the chilling level of control exerted by the mujahideen, their murderous power, Sissako’s film manages to portray the people of Timbuktu as warm, affectionate, courageous even as their spirit is overwhelmed and suppressed. There are scenes of violent cruelty all the more powerful for being understated. There are moments of heartstopping beauty, as when a group of boys play an imaginary game of football, swooping, moving and chasing an imaginary ball as though it’s real. Football is banned, although the mujahideen, in private and amongst themselves, have as animated an argument about Messi and Zidane as would happen in any western bar.

Music is banned too. On night patrol, an Islamic police officer follows a sound to its source and calls his leader to say, ‘They are singing praise to Allah. Shall I arrest them?’ An aching, silent dance where a man enacts the gestures of a flightless bird longing for the freedom of the sky is just one more unforgettable moment.

Of course, it’s not all beauty. There is the threat of amputation, there are stonings and executions. The vulnerability of women and girls drives a beat of tension throughout the film from beginning to end. This is a world where girls are stolen and ‘married’ against their will and against the will of their families. Even the local Imam, a voice of reason, is powerless against the mujahideen.

This is a film about cynical predators and the quiet courage of individuals who preserve something precious about the human spirit against overwhelming odds. The final scenes offer no hope of rescue or reprieve as various figures run for their lives across endless expanses of sand: a girl, a boy, a man, a gazelle. Men with guns are in pursuit.

As for a western audience emerging from all that golden beauty into grey, rain-soaked streets: Timbuktu is nothing like as far away as we once thought it was.